There is a new round of coasters out, and here we are to give you a little background on each, before they are set on the tables only to get soggy, stained, shredded, drawn on or collected by the coaster hoarders.

Artist Lyle Hehn designs our coasters, using his own artwork or that of one of his fellow McMenamins artists. Their explanations or inspirtations for the pieces are provided below. Cheers.

For more than a decade, Mary Topogna had a shop on NE Killingsworth in Portland called Hail Mary. It was a local institution in the neighborhood. A 2011 article in Portland Monthly said:

With her mosaics, Tapogna makes magic of the discarded bits of everyday items that the rest of us would toss in the trash. For instance, broken plates and cups, like the pieces I sweep up in my kitchen periodically, one of my foibles being a propensity to break my favorite china and glassware (not on purpose). I should drop them off at Hail Mary...

Our Lady of the Pipes

As you probably know, each room at the new Art House at Old St. Francis School is named for the title of a painting done by one of the artists who have lent their talents to McMenamins properties.

Artist Damian Zari has a wonderful and distinctly different style from what we are used to seeing at our properties – for example, he uses an air brush to spray the paint onto his canvas (whether the canvas be a wall, a piece of fabric or the human body). Below is the piece he did for the Art House, his summary of his influences for the work, and his bio.

In just a few weeks, we open the Art House at Old St. Francis School, where each room is named for the title of a painting done by one of the artists who have lent their talents to McMenamins properties. Each artist was asked to paint a mural that represents his or her experiences or inspirations from working with McMenamins. Below, read about Olivia Behm's contribution as well as her journey as an artist with the company. 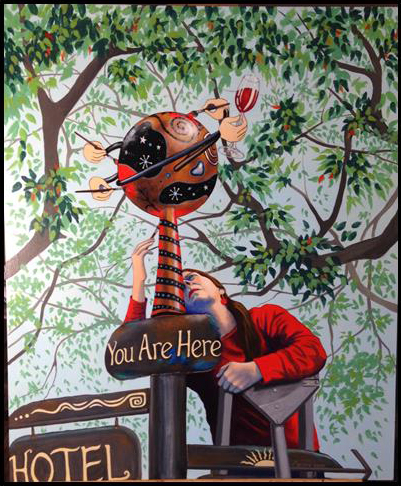 This is an emotionally difficult story to read, but ultimately a positive and rewarding one. McMenamins artist Jonathan Case, whose work is shown below, lost his child several months ago. Otis was just 20 months old when he had an unexpected seizure and passed away in the hospital on January 21, 2016. As a tribute to their son, Otis's mom Sarah Zollner Case launched a powerful movement of generosity in their son's name, a wave of kindness that has since traveled far and wide over social media. 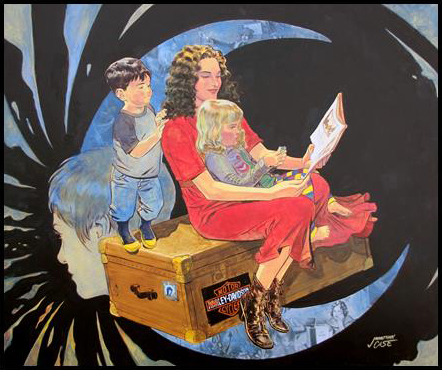 The painting below, called Inside Lyle's Head by McMenamins artist Jenny Joyce, hung for years at Dad Watson's in Seattle, prior to the pub's 2011 closing. Luckily, Lyle's head has found a new home at the Anderson School in Bothell.

You may know Chris Walla as the former multi-instrumentalist and co-founder of the Grammy-nominated indie-rock band Death Cab For Cutie. He is also a music producer, having worked with such bands as The Decemberists and Tegan & Sara.

From Images and Stories to Panels and Murals

With the Anderson School grand opening less than two months away, the artists - McMenamins' signature team along with contracted local artists from the greater Seattle area - are working steadily and with great creativity! Here are just a few examples of their work, based on historical photos, interviews and articles that Tim provided that came from the school, the alumni, Bothell Historical Society, local families and others.

Fred Eckhardt, legendary craft beer writer, brewing enthusiast and good friend to McMenamins, passed away on August 10th at the age of 89. He was one of the (if not the) most influential person in Oregon craft brewing. He self-published A Treatise on Lager Beers: A Handbook for Americans and Canadians on Lager Beer in 1969-70, long before anyone else was writing about home brewing and before it was even legal. The book went through several reprints and still remains a bible to those who home brew. One online review said: "When my friends want to know how to understand the beer they are drinking, this is the book I recommend. Note that I do NOT lend them my copy; I would not want to be without it." Fred wrote several other books on brewing into the mid-‘90s, including one on the art of sake brewing.

Below are some quotes from Fred during his tenure as the Dean of Beer Writing, rounding out with a few lines from one of his favorite songs. And this lovely new painting by artist Olivia Behm will grace the Fred Eckhardt room at the Anderson School in Bothell. It is just one of many murals and panels and orbs that have or will have Fred's jovial, waxed-moustached face on them for years to come.

A Match in the Attic

Three sisters have discovered an old trunk in the attic of their family home. The trunk is locked and the sisters can see the key to the trunk hanging just inside the fireplace. Before they can reach it, the ghost of their ancestor, Squire Boone, appears in the form of a hovering flame that settles just below the key, making it too hot to touch.

As we all know, the Anderson School grand opening is less than two months away. The artists have been working since last fall on new artwork for the property, based on Tim's historical research. Below is one of the new pieces that will hang at Anderson School, by local artist Carol Meckling, along with a short biography of a colorful life.

Our McMenamins historians and artists are busy researching and painting new historic-based panels for our next property, McMenamins Anderson School in Bothell, Wash. (opening October 15, 2015). Here, artist Jenny Joyce offers insight into her latest piece, which is an homage to Doctor Hebbel Hoff, a Bothell native who taught at Baylor and pioneered advances in the field of heart and physiology research, including the beginning of pacemakers in the 1950s. Joyce drew inspiration—literally—from Hoff’s studies and findings to create an embodiment of his achievements, and like all who are personified in our artwork, illustrate his personality.

The McMenamins artists have been working for months on new history-based artwork for McMenamins Anderson School, opening October 15, 2015 in Bothell, WA.

McMenamins Crystal Hotel: A Chat With Our Artists

One of the great things about our new Crystal Hotel is how the entire space blurs the lines between art and music. As you probably know, all of our properties feature intriguing, mind-bending art; in the hands of our artists, wall panels, doors, even pipes transform from the mundane to the visually fascinating. Throw rock 'n' roll in the mix, and you've got an opportunity to do something really special. For instance, every room (all 51 of 'em) here is named after a song that actually has been played on the Crystal Ballroom stage.

A Call from the Past

Our McMenamins artists having been painting new historically based panels for the Crystal Hotel (opening in May 2011) for months now. Below, artist Lyle Hehn gives a slightly mysterious explanation of one of his latest pieces...

This painting is intended for the Zeus Cafe, which will be on the ground floor of the building made triangular by the intersections of Stark and Burnside Streets and Twelfth Avenue in Portland, Oregon.

In 2006 McMenamins moved their corporate headquarters to a former wedding chapel and mortuary in North Portland. Finally, in May of 2010, a new "McMenamins" sign has replaced the words "THE LITTLE CHAPEL OF THE CHIMES" above the door to the offices.

Last week, I worked with two other artists in Room 219 at Edgefield. I painted a border in the bathroom of that room, because it had been painted over due to water damage.

I was closing in on the grand finale of the Blue Cheer painting and having a lot of fun with the panel when we got a message from the management at Old St. Francis School hotel in Bend, Ore., that a painting in the lobby of the theater had been keyed, or vandalized.

This company has been built on the special talents of many.

Sadly, we have lost some of these bright lights over the years.