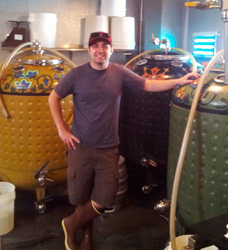 Nathan Whitney is the current Head Brewer & Cellar Master at the Edgefield Brewery. Before joining McMenamins Breweries in 2011, Nate worked at both the McMenamins Market Street and Ram's Head pubs as a line cook, server and shift manager. Starting out as a seasonal brewer for Edgefield, he then became a full-time brewer on the Edgefield crew in winter 2012. In spring 2013, Nate opted to move to the Old Church in Wilsonville to try his hand at small-house brewing.

When not busy brewing, Nate enjoys getting outside. He enjoys camping and gardening, and another favorite is checking out brewfests and sampling the different beers.

Nate relishes the complexity in stouts. There is a lot of variety within the style, and he enjoys learning and creating the subtleties of each sub-style. On the opposite side of the spectrum, he is very proud of a pilsner he helped create. Over-The-Counter Pils is a continental-style pilsner with extra hops added for a crisp, hoppy taste.  His love of beer is a result of living in the beer-cultured environs of Portland; he feels that brewing in Portland is like acting in Hollywood.  Nate started out homebrewing with his father-in-law and his fire for the craft has not been extinguished since.

After a shocking realization during his debut as a professional brewer, Nate emphasizes the true nature of the job and advises those interested in getting into brewing that the job is not as glamorous as it may seem from the outside. It requires a lot of cleaning, washing kegs, scrubbing and sweating. His motivation for continuing on in this career is the joy of pulling up to the bar after a long day at work and ordering a pint of something he made.

A quote from Humphrey Bogart lends insight to Nate's first experience with McMenamins: "The problem with the world is that everyone is a few drinks behind." In college, he was saving the world, one pint of Hammerhead and Terminator at a time, while others where drinking lighter beers. His advice for those getting into professional brewing is simple: "Relieve the pressure from the yeast gear away from yourself so you don't get doused with yeast." This was an early lesson learned the hard way.